Here’s what you’ll need:
– One thumb drive
– One grandMA2 console on grandMA2 onPC running software version 3.3.4.3
– grandMA3D v3.3.4.3 (Optional)
– The Consoletrainer 2018 showfile (Includes our updates up through Day Seventeen) so you can play along.
– FeedBack Gobo Fixture
– Custom Gobo Images for our FeedBack Gobo Fixture – we’ll also be adding these to our Image Pool.
You can grab the software for free at http://www.malighting.com/en/support-downloads/software.html

Last day! Day 18 of  our “18 in 2018” workshop.  Thanks for sticking with me.   We’ll look at using yesterday’s fixture profile to put visual feedback information about the state of your show into your layouts. This last tip is an idea that you can build on and modify for your own purposes.

OK, for the last time:  back up your show and rename for day 18.  If you need the showfile-  download it from the link in the YouTube description, or at my website, consoletrainer.com.

The idea here is to use that Feedback Gobo fixture profile we imported yesterday as visual feedback in our layouts that let’s us or our operators know that a cue, or a timecode track, or whatever has been executed.  I’ll take us through the process to show how simple it is.  The great thing about this is that you can get as creative as you like.

First off, lets store a New Layout.  I’m calling it SHOW because I’m going to also make it a place where looks could be triggered.  Remember those Song Page Macros that we made on Day 11?  I’m going to use those as an example here of a Macro that could be in my layout.  To drop a macro into a layout, you can type Assign Macro # and then touch the layout.  Great.  I’m also going to drop in our Timecode song macro as well. While you might not use a layout to run back a concert, think about other types of shows where a Layout View full of triggers might be helpful….. for example:  a corporate event like a tradeshow booth. Make sure that your layout isn’t in SETUP mode and touch one of these Macros.  It triggers the same as it would had you touched it in the pool.  And… we can even make these look a little nicer.  I’m want to add an image to these Macros, and I’m going to use the Gobo images from yesterday in this example.  First thing we have to do is add them to our Image Pool.

I’ll EDIT an empty block in the Image Pool, and from here – I’ll go to the User Gobos folder because I added these images into here yesterday- but you could also import them from your thumbdrive if you choose. You can repeat this process to add in as many as you like.

Now, back in our layout, go into SETUP and edit the “Simple Song” macro.  I’ll change the “Image/Icon” to be my “Song 1” image.  I also need to change the visualization to “simple.” I’m turning off “Show Name.” You can also choose to turn off the ID and Type if you’d like to get rid of all of the text.  I did not love how we saw the images on my gobo roll through, so I’m going to make an edit to the fixture profile and set it to “snap.” Better. Back in our layout, I want to do the same thing to the sequence for this SONG 2 Macro.

This is already starting to look more user friendly.  The only bummer about triggering our macro in this Layout is that there isn’t anything that really tells us that the trigger happened.  Obviously, in this example, we could look at our stage – but I want something to show up in this window.  That’s where our Feedback Gobo comes in.  Grab that unit that we added yesterday and Store him into this same layout view.  This is a unit that doesn’t exist in real life- which is why it can be patched anywhere.  If you take a minute to look at the Fixture’s profile, you’ll notice that it is only a single Gobo channel.  In the wheel manager, I’ve already added in a few generic things that could be used in this Layout example, and if you like it- you can go to town on editing it and adding your own images to suit your needs.

But, I need to be able to see these gobos in the Layout View, so we need to edit this unit. Under Visualization, choose “Spot.” I also like to choose “Fit” under Image Size. I’m definitely going to get rid of the Dimmer Bar and the Dimmer Value, because this fixture doesn’t even have a dimmer. Now, I if I change the gobo, I’ll see my custom images show up within a circle in this layout view.  I still need to make this automatically happen when I trigger these macros.  There’s a lot of options with regard to how to do this… in my example, I’m going to store the gobo values into certain cues.  For example – this Song 1 Macro triggers a particular cue in a particular sequence.  So, If I store a gobo from my Feedback gobo fixture to that same cue, then when I trigger the macro – I trigger the cue – which triggers the gobo and voila: Instant feedback in my layout.  I’m going to do the same thing with the sequence for this other Macro.  As I hit each one, I get feedback in the layout about where we’re at.  You can choose where you store this information… perhaps you want a dedicated sequence for this Feedback Gobo, perhaps you want virtual sequences on a different page… the options are up to you and what works for your show file.

AND, your show file might warrant multiple feedback gobos within the layout. If that’s the case, just patch more units and place them into the layout.  Update your new unit into whatever cues you like the same way we did the last one.  In this example, I’m setting the second Feedback Gobo as one that tells me the status of my timecode triggers.

This example is very simple.  You can get as complex as you like. As long as the concept makes sense and you find it useful, you can get pretty creative with this stuff. 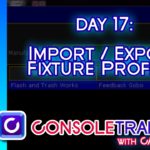 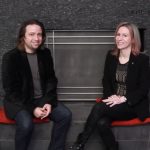 Next article - The HuMAn Talk Series with Cat and Joe »