Here’s what you’ll need:
– One thumb drive
– One grandMA2 console on grandMA2 onPC running software version 3.3.4.3
– grandMA3D v3.3.4.3 (Optional)
– The Consoletrainer 2018 showfile (Includes our updates up through Day Six) so you can play along.
You can grab the software for free at http://www.malighting.com/en/support-downloads/software.html

Links for more information about Delay timing can be found here and here.

Hey there.  It’s Day 7 of 18 in 2018. Lets talk about putting some release parameters into cues, and then look at the Release Mode on a cue. You already know that turning OFF a sequence is the same as releasing it. Today, we’ll get into releasing individual parameters within a cue- which is super handy in simultaneous multi cue playback.

If you were with me yesterday, just  back up your show and rename it for day 7.  Today is going to build off the bump we worked with yesterday- so I’d encourage you to watch the video for Day 6, if you haven’t already. If you need the showfile, download one that includes our updates from yesterday from the link in the YouTube description, or at my website, consoletrainer.com.

Remember this bump on 1.115 that we were playing over top of Cue 3 in our Simple Sequence? We had made it a TEMP, and you could see the Position’s delayed timing on the transition into the cue. Today, I want to continue on that delayed timing motif, and make a second look that lets our lights return to their original position with a similar delayed timing, instead of all moving back together.  To start with, I want to change our TEMP button to a GO button.  Now I can tap it, the cue plays and does not release when I let go.  I want to write a second cue that tells these Quantums to release the color and position information.  When they’re told to release, they’ll restore back to the look they had in my Simple Sequence. To do this, grab the Quantums and change to your Programmer View. On the Position encoders, if I tap on Pan or Tilt, the calculator will appear.  Right here is the option for “Release.”  Do the same thing for Tilt. Click the encoder and pick “Release.” We need to do the same thing with “Color”, and we need to do it on the “Mix Color” attributes.  Oh hey- here’s something I don’t love right now.  This new user we copied defaulted to RGB instead of CMY.  If you want to leave this alone, you absolutely can… but if you’d prefer to see CMY on your wheels, lets do this: Hit the SETUP key and go to “Defaults.” In here, go to “Settings” and then click on the “Default Mix Color Readout” to change it to CMY. Cool.  Anyways, we were about to also put release values on our Mix color attributes- and we have to do all three of them- just like we did for Pan and Tilt.  If you notice the “R” in parenthesis on your encoders and in your programmer- that always means “Release.”

Before we store this cue, we want to remember to put the delayed timing on the position information.  I like to keep an eye on the programmer when I’m doing this just to ensure that I’m putting the timing in the right location. I’ll click on Delay so that I can do just that.  Before we key this in, switch to the position encoders so that we don’t accidentally put the delay timing on the color. Press the TIME key until you see the word DELAY on the command line.  Now you can type in any delay time you want.  I want to spread out the delay, so I’m typing .5 THRU 0 THRU .5.  That means my outside fixtures will wait a half second before releasing, while my center units will release right away.  All others in between will be equally spread out over time.  If this is new to you- it will make more sense when we see it playback. It looks like I also had some delay time on color in the first cue, so lets move back to COLOR and do the same thing. After that, store it as Cue 2 on of “Floor Bump” Sequence and clear your programmer.  We should still be looking at Cue 1, so click the GO button on our Floor Bump to see what Cue 2 looks like. You can definitely see the fanned out delay on the Position, but I think I want to add a little fade time to that cue.  Let’s make it a one count. Well, we’re mostly there.  See how our Quantums released the color and released back to the base position, but didn’t restore their Effect?  That’s because I need to put a release on the STOMP value as well.  One more time- select the Quantums and click here where it says “Effect Layer”.  On my Pan encoder, I can see the STOMP value.  Let’s change that to a RELEASE and UPDATE cue 2. Now my effect from the Simple Sequence is back.

It looks like I’ve turned off the bump, but if you look closely- you can see that Cue 2 is still active. I want this bump sequence to turn off automatically after cue 2 completes, so what I’m going to do is write a follow cue to do just that.  This cue will be a blank cue, so make sure there’s nothing in your Programmer, then STORE this nothingness as Cue 3 in your bump sequence.  I’m going to rename it Release, but we’ll need to do a couple more steps.  Remember when we changed the mode of one of our cues to BREAK a couple videos ago…well, find that same Mode cell for cue 3- right click on it- and this time, pick Release.  That means, when this cue is played- the whole sequence will be released. Like I said, I want this to be a “follow”, so under Trigger, on Cue 3, select “Follow.” Press Go and you’ll see this sequence release.  Let’s play thru the whole thing again.  Press go once and we’ve got our bump look up.  Now, you need only press Go one more time to see the look release and then cue three will automatically play, and automatically release the sequence.

This isn’t the same as a Flash button- but for the sake of our muscle memory it now works more like a Toggle. Press once for on, press a second time for off.  It’ll just be a fancier off than what you would get with a Toggle. 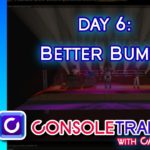 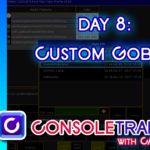