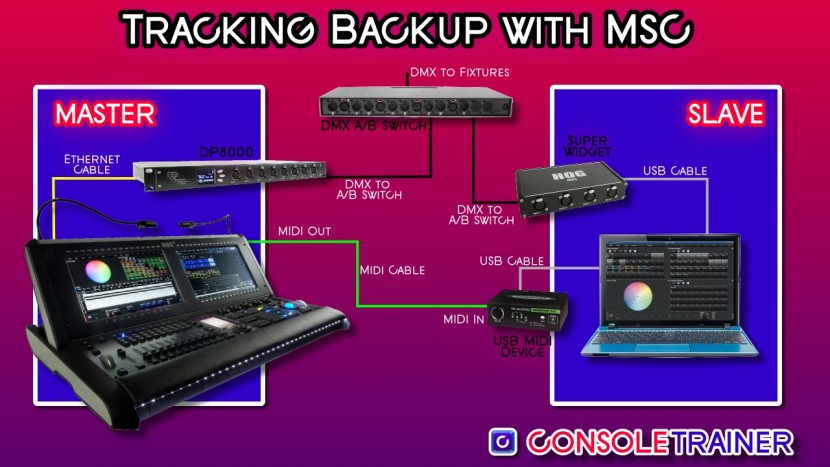 In playback situations, it is a good idea to set up a tracking backup system. This means that if your main console should crash, you can switch your DMX output to the backup console’s control. While Wholehog OS does offer tracking via network, this tutorial is all about creating a tracking backup using MSC. In the above example, we are using a Wholehog 4 console with a DP8000 as our Master console and a Hog4PC with a Superwidget as our Slave (backup) console.The Master console sends MSC (Midi Show Control) commands to the Slave console via the midi cable. Both consoles MUST have the same show loaded to each of their hard drives.Both consoles MUST have their own independent DMX output.  The DMX output of both consoles should be delivered to a DMX Switching device (the diagram above shows a DMX A/B switcher by Doug Fleenor).  Finally, the DMX output runs from the Switcher to the fixtures you wish to control.  This could be one universe or it could be many.

How do I set up MSC in and MSC out on my consoles?

MASTER CONSOLE:
1- By default, MSC is already outputting from your console; however you should confirm that it has not been changed.  Press the SETUP key and select Network from the bottom of the right-hand monitor.
2- Select Console and press Settings
3-Select MSC Out from the pop-up window and press OK
4- Connect a midi cable to the MIDI OUT port on the back of the console or midi device.

SLAVE CONSOLE: 1- Connect a midi cable to the MIDI IN port on your console or midi device.
2-Press the SETUP key and select Network from the bottom of the right-hand monitor.
3- Select Console and press Settings
4- Select MSC In from the pop-up window and press OK

If you are using Hog4PC and an external midi device, don’t forget to configure that device in the Hog4PC CONTROL PANEL. 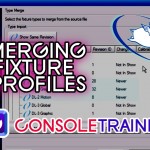 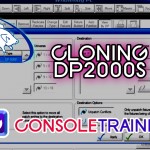